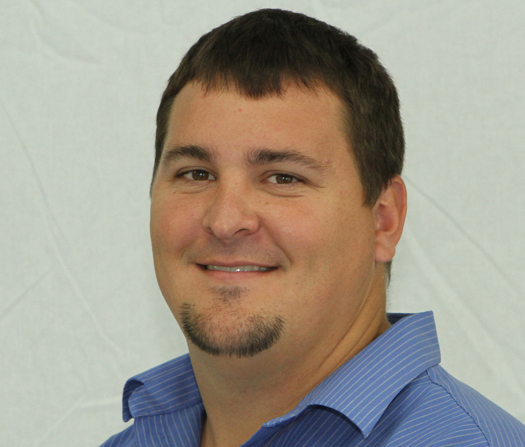 After spending several years crunching numbers in an accounting firm, Josh quickly became a jack of all trades after joining ITM. Today, he not only manages ITM’s finances but also tracks time, equipment use and billing for ITM client projects.

Numbers have always been important to Josh Fishback.

Clear back as far as fifth grade he loved solving math problems. Not only did the subject come easy to him, he envisioned himself from a young age going to college and becoming a certified public accountant.

By high school he became a three-sport athlete in football, basketball and track at Clermont Northeastern (CNE), where he lettered for varsity all four years. And once again numbers were important in his life — especially when measuring how far he could heave both the shot put and discus. His senior year in 2005, Fishback set his high school’s record in both events and would go on not only to qualify for state but also to secure a scholarship to compete for the University of Cincinnati.

Just as he imagined as a kid, he enrolled at UC’s Lindner College of Business and completed his bachelor’s in accounting while throwing for the Bearcats. While a Div. 1 college athlete, Fishback endured two serious knee injuries and a shoulder tear that ultimately ended his throwing career, but along the way he also qualified for three straight Big East championships.

Coming out of college in the middle of a recession, Fishback was thankful to spend a year doing the books for his father’s longtime masonry business. Not only did it give him great experience in his field, it gave him more time around the man he admired. John Fishback (who passed away in 2020) taught his youngest son the value of giving back to the community. He was a constant presence around CNE athletics, but Josh also saw the more private contributions he made — the financial help and life advice he gave to those who didn’t grow up with much family support. Fishback credits his dad with inspiring him to return to CNE to give back in his own way — as a coach. He coached freshman boys basketball and assisted with both track and football before spending several years as varsity assistant basketball coach.

Professionally, Fishback took a job at DCA Certified Public Accountants for about a year when the team at ITM reached out to him in early 2012 to offer him a job. Fishback enjoyed the culture at ITM right away and immediately began to learn as many aspects of the business as possible. He was the only non-engineer in the building, but he was quickly picking up the lingo and still marvels at the team’s engineering accomplishments for clients worldwide.